Thank You to Lotus Light Charity from…

Who sent you here?

The new version of fabric masks is…

Through caring and learning we help to build a better tomorrow

Under the guidance of president Master Lian Tzi, 2017 has been another extraordinarily year for the Lotus Light Charity Society: from the successful “Lotus Light Community Caring Day” to the “Winter Charity Drive 2017” campaign, and to the monthly “Hotmeal for the Homeless” programs etc.,  the Charity actively involved in its humanitarian missions to help the needy.

Master Lian Tzi received 2017 BC Community Achievement Award in April 2017, for her leadership in the charity’s multi-faceted programs and projects.to improve the lives of disadvantaged youths, seniors, low-income families and the homeless in the community.

2017    LLCS (Vancouver) donated a total of 20,000 Lbs of rice in 2017 to the Greater Vancouver Society in the Annual Rice Donation program to support the low income families in our community.

2017    LLCS (Vancouver) continued the Feed Hot Meal to Homeless program to provide warm meal to the homeless community at Oppenheimer Park of DTES Vancouver once a month through the 2017 whole year. Over 3,000 low income individual were enjoyed these free lunch provided by Lotus Light with the supports of generous corporate and individual sponsors.

2017    In the heart of the downtown eastside Strathcona Chinatown neighborhood, on July 8th at Oppenheimer Park, Lotus Light has held the first annual “Lotus Light Community Caring Day” to celebrate community caring. The event was officially proclaimed by the City of Vancouver to recognize the Lotus Light Charity Society’s 24th year anniversary of good work in the local community amongst a gathering crowd of over 1,000 people. 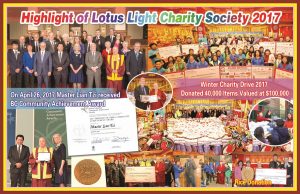 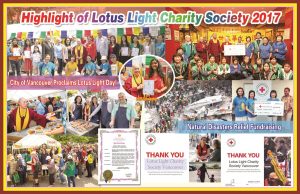 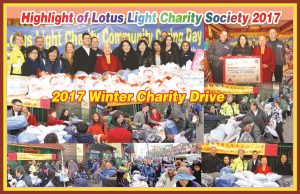 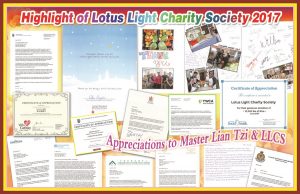